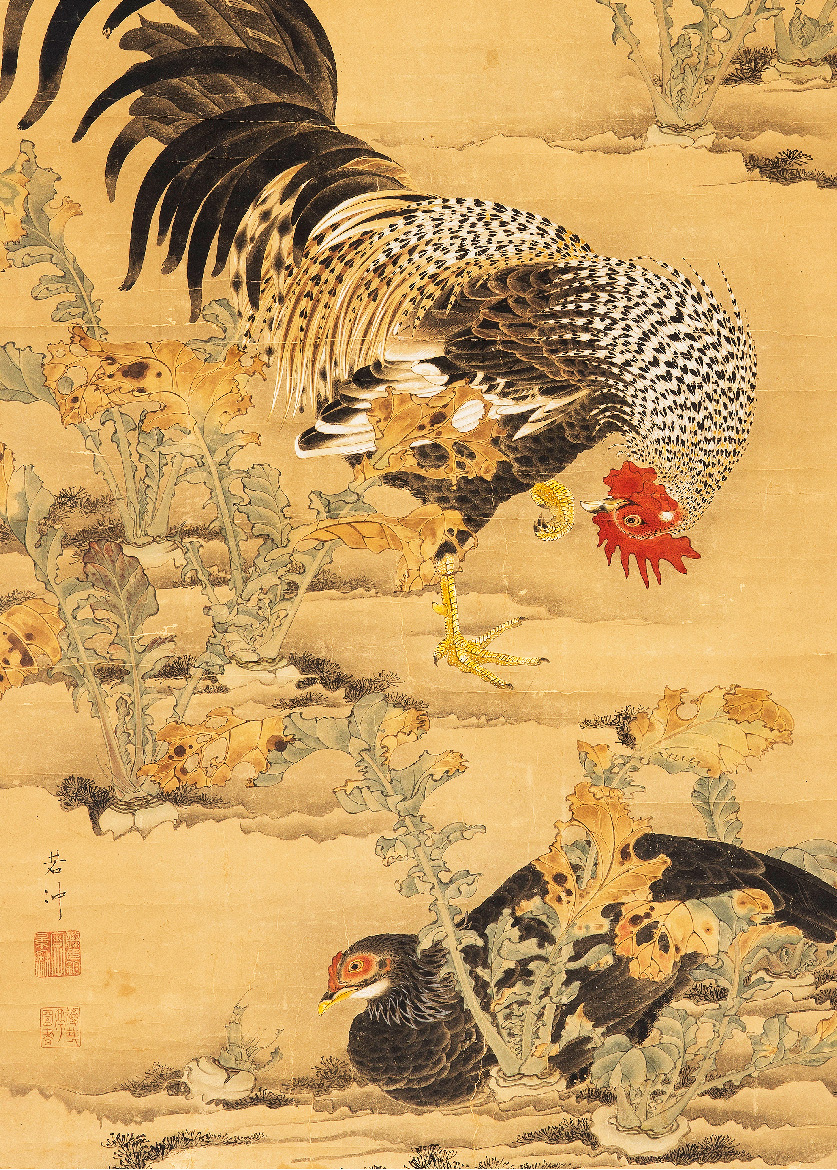 Ito Jakuchu (1716-1800）who has been gaining popularity recently, was born as the eldest son of the vegetable wholesaler Masuya in the Nishikikoji market in Kyoto.

“Rooster and Turnips”, which was first released at this museum last year, was painted in his early 30’s when he was engaged in the family business and attracted attention as the earliest work of Jakuchu.

In the 18th century when Jakuchu was active, Kyoto was the arena of talented and unique painters.  To name a few, Yosa Buson (1716-1783), who showed his remarkable talent in the fields of painting and haiku poetry, Ike no Taiga (1723-1776), who perfected the Bunjinga genre (literati painting) in Japan, Maruyama Okyo (1733-1795), who established the innovative style of painting based on sketching, and Soga Sohaku (1730-1781), a painter with an eccentric style that surprised people.

They accomplished their own painting styles while interacting and influencing each other.

This exhibition demonstrates the works of such painters of the same age as Jakuchu to disclose the enchanting power of their works.

The First Venue: Fukuda Art Museum “Why were so many geniuses?”

This venue showcases all the works of Jakuchu from the Fukuda Collection such as “Roosters and Turnips” and “Folding Screens of Roosters and Hens” drawn at the age of 82 in his last years (displays will be changed during the exhibition). Also exhibited are the excellent masterpieces which influenced them, such as “Folding Screen of Old Pine Tree,” the latest work of Yosa Buson, and the works of the unique painters who were active in Osaka at the same time.  This exhibition introduces the charms of the painters of Jakuchu’s age.

The Second Venue: Saga Arashiyama Museum of Art and Culture “We compare the  geniuses”

In this venue, the works of those painters like Jakuchu, Okyo, Rosetsu, and Goshun who were active in the 18th and 19th century are exhibited side-by-side by subjects, such as peacocks and tigers.
You can appreciate the works in comparing the common points and the differences in their drawing method.